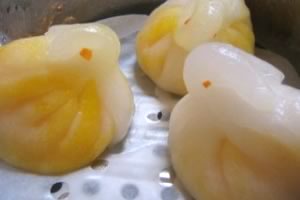 There’s probably nothing outside Asia quite like the dim sum scene at Mission 261. In place of the usual dim sum clatter and bustle, an aura of decorous formality prevails. Synchronized teams of gray-suited waiters deliver the food on trays paraded through vast dining rooms filled with Prada- and Gucci-attired diners.  Calming tones of Chinese classical music float through the air, provided by a woman on a small stage plucking a lute-like pipa. (She’ll occasionally forgo tradition and break into “Oh! Susanna” or a piece of ragtime.) Behind the musician, continuous reruns of recent golf tournaments flicker on a huge projection TV screen. In Asia, this wouldn’t be unusual; here it seems positively surreal.

Excellent dinners also are served here, but the real raison d’être of this sprawling restaurant is parties: wedding parties, 100th birthdays, corporate Employee Appreciation Day festivities and such. Built on a landmark site that’s part of the San Gabriel Mission Historical District, the restaurant and its labyrinth of large and small private rooms are shoehorned into an old adobe on the site of San Gabriel’s first official city hall. The park-like surroundings help celebrations seem more extraordinary, and the Chinese custom of using restaurants to entertain keeps its rooms booked.

But don’t wait to be invited to a party; just come for dim sum or dinner. Prefer a proper lunch? The restaurant serves a wide variety of dishes throughout the dim sum hours.

These are no ordinary dim sum, however. Many of the tender dumplings and savory pastries are shaped into birds, fish and animals. And they’re delicious — prepared in the delicate, au courant style of upscale Hong Kong tea halls. You order these and other dim sum from Technicolor-bright photographs on a picture menu. Beyond the fanciful shapes of the quirkier items lies seriously good eating that can often measure up to the best to be had in Hong Kong.

So don’t insist on your usual dim sum favorites. Although siu mai and fried wontons are available, this is the place to acquaint yourself with new paths being taken by Chinese chefs today. Try the dim sum “bees,” with their stripes of noriseaweed. Created by molding minced shrimp around morsels of salted egg, they are lightly deep fried. The seafood dumplings (shaped like baby carp) have a coarsely chopped filling of fish and shellfish without the customary fatty pork binder. Most fillings are clean, lean and fresh tasting. Even the “juicy pork dumplings” possess a remarkable lightness. And not a drop of their rich stock leaks until you bite into them.

There are a few duds. Noodle and rolled rice sheet dishes, which are often lackluster here, are ridiculously overpriced on the dim sum and dinner menus.

On the other hand, vegetable dishes on both menus are worth what might look like high prices. Lightly poached in broth, rather than getting the usual stir-fry treatment, they are garnished with luxury accents such as preserved and salted egg or a generous mound of whole caramelized garlic cloves.

In fact, this kitchen makes frequent use of extravagant accents such as crab roe, shark’s fin and the highest grades of braised dried abalone. Fried shrimp and steamed broccoli, served under a cloud of soufflé-like whipped egg white, has a scattering of marvelously crunchy crab roe that unifies the flavors.

Oddly named dishes that seem unappetizing can turn out to be wonderful. “Shrimp colloid balls stuffed with cheese,” for instance, are delicious deep-fried shrimp balls with a bit of mild cheese filling, encased in a crust of minuscule croutons (this $18.85 appetizer is sufficient for five or six people).

The word “pith” may not whet your appetite. But this dish of steamed chicken paillards rolled around slender asparagus-like bamboo pith, served in a broth flecked with a fine dice of “pumpkin” (actually winter squash), could take bamboo pith mainstream.

Almost anything from the “Barbecued & Roasted” list is simple, straightforward and carefully cooked. Deep-fried pigeon, with its dark, rich meat and brittle skin, is understandably one of the most popular specialties.

Mission 261, it seems, has something to suit every situation and pocketbook in a setting that makes a visit feel like an escape to a day in the park.