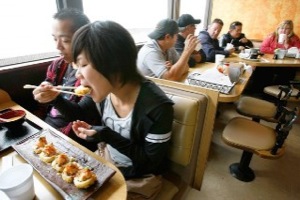 Truffles shaved onto wild-caught yellowtail sashimi orkanpachi nigiri splashed with black caviar might begin your omakase at Got Sushi? Or the chef might enrobe supple ribbons of pristine snapper in creamy cured unibrightened with the sharp citrus snap of yuzu and house-made soy sauce. Close your eyes and for a moment it’s easy to forget that this tiny sushi bar is squeezed into a corner of King’s Burgers, a fully operational burger joint in Northridge.

These gut-busters still draw a loyal crowd to King’s. But so does a wild array of raw fish creations fashioned by the owner’s son, sushi chef Jun Y. Cha. Cha, an alumnus of Sushi Roku, Katana and a handful of other high-profile sushi havens, agreed to help his dad spiff up King’s menu about three years ago.

He didn’t envision then that he would be adding a full sushi bar offering sake and beer and a separate staff to handle the raw fish. As things evolved, Cha also drew on the European cooking techniques he’d acquired in local classes, integrating them into an impressive breadth of Asian-influenced dishes that he calls “modern Japanese cuisine.”

These days, customers have several menus to choose from: the American-style King’s Burger menu posted on a board above an ordering counter, a standard sushi selection and a list of modern Japanese sashimi plates and exotic rolls, along with Cha’s Asian American-inspired fast food — bowls, burgers, salads and lunch plates — that he has recently created for King’s.

The changes didn’t seem to faze King’s regulars, who apparently were already blasé about pop-up restaurants and gourmet food served from trucks. But unlike those ventures, Got Sushi?’s success came about less by design than by a whim of fate. And now, without the glitz of Hollywood or the restraints of a corporate umbrella, Cha can let his imagination run wild. And he does.

He’s come up with more than 20 sashimi plates and other raw fish-based items: Seared pepper-encrusted tuna slices surround a salad of Granny Smith apple and arugula heightened with the merest splash of balsamic vinaigrette. Tender octopus under a scattering of crunchy tobiko caviar and cilantro comes in a sweet-spicy emulsion. Barely seared slices of Cajun-spiced tuna splayed out around a little mound of still-warm sautéed spinach and enoki mushrooms are drizzled with a creamy peppery sauce. The heat and sweet and creaminess ricochet around your palate in a high-wire flavor balancing act.

If the restaurant has a shortcoming, it’s that it can take a while to read through all those menus. But the place is nothing if not democratic. At the top is Cha’s omakase (still modestly priced, considering the quality, at $60 and up). In the middle are sassy rolls that are models of glorious excess — in the best possible way (the lemon roll, for example, starts with spicy tuna and asparagus, is draped outside with tuna sashimi and avocado and then subtly garnished with lemon zest and pine nuts secured by tiny drops of olive oil).

Cha, for his considerable efforts, may not get the buzz of a chef backed by well-connected investors with access to a PR machine. But a group of admiring fans has been finding its way to King’s Burgers, where Cha is realizing his dream in a way that he never expected.