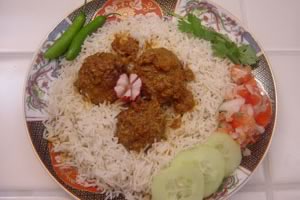 “What about the kala pocha?” asks someone at our table at Khybar Afghan  restaurant in Reseda. Our waiter, dressed in black track pants and  “Nike, Inc.” Nike soccer shirt, shakes his head. “You don’t want that,” he assures us. “It’s for breakfast.”

The soup, made with boiled lamb’s head and feet and a few innards,

would undeniably be an eye-opener. But we decide instead on qabili, which our waiter tells everyone is Afghanistan’s most fabulous rice dish.”

What else to get? The menu lists but doesn’t describe the dishes offered (the regulars probably already know their favorites), but fortunately our waiter — who we later discover is Khybar’s owner, Mohammad Safdari — gives detailed answers to even the most arcane cooking questions.

Which is a good thing, because, despite Afghanistan’s present poverty, the country’s cuisine is richly layered and complex, interweaving elements from its Persian, Indian and Chinese neighbors, who contributed centuries of culinary innovation via the Silk Road.

While we ponder our options, Safdari has his sole kitchen helper bring out samples of bulani to nibble. The tortilla-thin crispy flatbread, folded over a smear of sweet, slow-cooked onions and leeks, gets wolfed down before I can request the cilantro dipping sauce that usually comes with it.

Khybar is in a spartan storefront that Safdari has spiffed up with upholstered chairs and ornately framed replicas of European oil paintings, a contrast to the refrigerators filled with Snapple and soda that are also part of the decor.

The qabili palau arrives. Mounded majestically on an oval platter, the heap of mahogany-colored basmati rice, stained with meat juice and great quantities of cardamom, hides tender chunks of braised young beef (rather than the lamb often used). Bright swirls of candied carrot shreds and plump cooked raisins lend color and a heady perfume. The creation recalls an Indian biryani or a Persian polo, yet it’s distinctly a dish apart.

Soon our plastic-lace tablecloth is piled with kebabs and a rainbow of subtly spiced vegetable preparations: luscious long-braised eggplant, whose caramelized sweetness is balanced with tart, creamy yogurt sauce; potatoes sauteed with loads of garlic, onion and cilantro; dol chalau, yellow lentils cooked down to a creamy puree and enlivened with garam masala-like spices; and sabzi chalau, a dish of long-simmered spinach and onions studded with beef chunks. Heaps of snowy basmati rice accompany everything.

Rice, the soul of Afghan meals, is made in several distinct styles. When prepared simply and served on the side it is called chalau (rhymes with “allow” and known in neighboring Iran as chelo). In more complex dishes, steamed together with fragrant spiced meat or vegetable stews, it is pilau.

Yet another category, based on sticky rice rather than basmati, includes shoala gushti — stewed with bits of meat, garbanzos, dill and a subtle splash of chile. Homely looking though it is, the combination has an elusive yet delicious flavor.

Dumplings, the must-have item in any Afghan restaurant, include manti, beef-and-scallion-filled crescents similar to Chinese jaozi or Korean mandu.

But instead of the East Asian soy-vinegar dip, these dumplings rest under layer after layer of sauces and garnishes: The first sauce, ground beef suffused with spices and a hefty dose of garlic, is drizzled with a tart yogurt sauce that cuts through the richness of the meat.

Next comes a light sprinkling of diced vegetables and finally a scattering of crushed herbs.

Aushak, flatter silken-skinned, chive-filled dumplings, are sauced in the same elaborate way, giving the whole dish a resemblance to lasagna.

With the Indian-esque spice combinations, the Central Asian kebabs and rice, and the Asian-influenced dumplings, you get a taste of how Afghanistan acquired its nickname       “Crossroads of Asia.”

The phrase could also describe Khybar’s mash-up of a neighborhood. There’s a Korean supermarket in one direction, a tofu-making operation in the other and a multitude of Persian and Indian food shops and eateries close by.