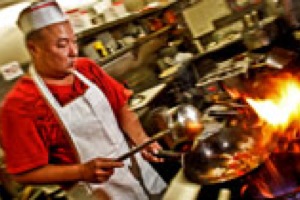 When the platter of steaming, saucy chicken chunks is set on our table at Omar, a months-old Uighur restaurant in San Gabriel, it’s clear we’re in uncharted culinary territory. The sauce is dappled with tingle-inducing Sichuan peppercorns and chocolate brown star anise pods. Cardamom leaves poke out from a layer of sliced garlic cloves that blankets the meat. But the wide, flat handmade noodles soaking up those juicy flavors resemble a Moldavian grandmother’s handiwork.

You could say this hybrid creation is a metaphor for all Uighur cooking. The cuisine evolved in a part of Turkestan that became Xinjiang after its annexation by China. Even now the area is often thought of as the country’s Wild West — a vast land beyond the Great Wall, home to the Uighurs (pronounced WEE-gers) and other distinct cultural groups.

Some Uighur dishes have the stark simplicity of Central Asian nomad cooking. The boiled mutton ribs (called finger mutton on the menu) come to mind. But other foods draw from the kitchens of the elite or incorporate Chinese elements.

The house pilaf (Xinjiang zhuafan on the menu) is reminiscent of Afghan qabeli pilaw. Simmered in broth and dotted with fragrant whole cloves, the rice is strewn with bits of mutton and carrot shreds that are roasted until they’re sweet and nearly caramelized.
The curiosity factor alone makes it hard to resist ordering an item described as “Xinjiang meatloaf sandwiches.” Actually, the sandwich is a meat pie the size of a small pizza. The paper-thin crusts enclose a juicy ground meat and onion filling that’s brightened with coarse ground black pepper. Outstanding though it is, this meatloaf probably won’t remind anyone of the classic American school lunch fave, but it’s the kind of food people fantasize about driving across town to get at midnight. (Caveat: Omar’s closes at 10 p.m.)

To go with the pie’s familiar flavors, a bowl of creamy Xinjiang milk tea might be ideal. Although salted milk hasn’t yet gone mainstream, it’s gaining an audience among people who appreciate India’s salty lassior doogh, the salted yogurt drinks served in Persian restaurants.

Mutton, the favored meat in Xinjiang, figures prominently on this menu — in brothy stews, in cauldrons of soup, as grilled ribs and, of course, as kebabs. Omar’s are the long, skinny satay-style variety that mimic those hawked at Beijing’s Wangfujing night market or on the city’s restaurant-filled Ghost Street where smoky cumin-accented grease clouds billow from the Xinjiang migrants’ stalls and cafes.

Omar downplays the chile and cumin coating that’s sometimes used to excess at such places. Here the kebabs are all about the meat, and it tastes best with Omar’s vegetable salad. The lightly marinated mix of onions, peppers and cucumbers has a sweet-tartness that may remind you of the garnish on Vietnamese banh mi. For the mutton-averse, Omar also offers beef kebabs with a more delicate flavor.

This restaurant isn’t owner Munire Omar’s first. After finishing university studies, she opened a Uighur restaurant in Shenzhen in the Guangdong province (near Hong Kong) at which folk dancing and music entertained guests. She says her love of entertaining may be genetic; her father, a renowned Uighur classical dancer, performed all over China. In his honor, miniature classical Uighur musical instruments decorate the restaurant’s walls.

This being a family venture, Omar’s brother Urkesh arrived to help out. Not an inexperienced hand himself, he also owns a restaurant in Urumqi, Xinjiang’s largest and most modern city where the two were raised. Since bread and wheat products figure prominently in Uighur cuisine, they’re working on installing a specialty oven to bake their own nan, a Uighur staple.

In the meantime, house-made noodles, both the rolled-and-cut variety and the hand-pulled ones, satisfy the Uighur love of wheat. The thump and slap of dough hitting the counter precedes the arrival of your order and you can watch the magic in the semi-open kitchen as thinner and thinner ropes materialize from the dough blob.

True, hand-pulled noodles aren’t a rarity around the neighborhood — but these bouncy, chewy strands are another story. A generous platter of them comes to the table naked. Then the waiter brings out a simple soupy sauce of lamb, sweet peppers and other vegetables to ladle over them. The noodles are springy beneath the teeth, intensely wheaty tasting and magnificent.

Needless to say, with only three people working at the restaurant you might have to be patient to get an order at peak mealtimes. But Omar’s noodles — not to mention its little-known cuisine — are worth the wait.