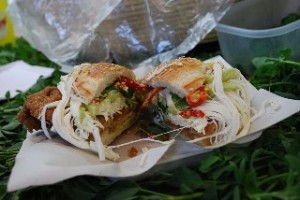 The tiny Van Nuys restaurant’s cemitas are a wonder to behold. In true Dagwood fashion, the sandwiches are piled high with a delectable assortment of fillings.

–Until now, cemitas poblanas, the heroically proportioned, sumptuously layered central Mexican answer to Dagwood sandwiches, have been more or

less relegated to cult status. But lately, these Pueblan street foods have been drawing long lines at certain Southern California taco trucks. And food buffs will probably notice that more and more mom and pop Mexican cafes are adding them to their menus.

The most impressive examples, though, turn up in cemita shops, where the cook’s attention isn’t diverted by enchiladas or pozole. One such place, Cemitas Poblanas Don Adrian, has surfaced next to a laundromat in a former Van Nuys shawarma shop. At mealtimes, snagging a seat at this sliver of a restaurant can be as challenging as it is at Pizzeria Mozza.

The bun is crammed with a thick layer of ripe avocado topped with equally thick slabs of cloud-white fresh panela cheese, then mounded with a sizzling filling and finally topped with a few fine strands of red onion, optional shredded string cheese, a fresh herb garnish and thick slices of roasted red jalapeno or a tonsil-torching chipotle chile puree, which the timid may order on the side.

Fillings represent an international grocery list from the Old and New worlds. Among them is proprietor Adolfo Huerta’s house-made cecina, produced with techniques passed from his grandfather (Don Adrian himself) to Huerta’s family, who made a business of the specialty back in Puebla.

Cecina purists order it in the simplest of ways — in the house quesadillas or in chalupas, where it’s simply grilled, mounded on a tortilla and garnished with a sparse scattering of string cheese and dabs of mild green salsa.

Still, the principal offerings are the namesake cemitas, and cecina goes into some of these too. It comes in two forms: grilled au natural or, to my taste, the even more beatific cecina adobada, bathed in an intense marinade that blends musky achiote, cumin and mysterious spices.

Other fillings include the voluptuous barbacoa of lamb, the highly seasoned pollo adobado, the chewy sliced pickled beef tendon (pata de res) and several permutations of milanesa. This comes pounded handkerchief thin and pan fried. Of the milanesas, the lomo (pork loin) is the most popular, although you can get chicken and beef versions too.

A dish is born

There’s also a vegetarian cemita, and it’s not simply trendy. According to Huerta, meatless cemitas were first on the scene, sold at tianguis (open-air) markets. People with a little extra cash would take their cemita over to a meat vendor, who would fry up a garnish for the sandwich. And so the cemita’s evolution began.

The crowning touch of any cemita, the fresh herb papalo, possesses a pungent aroma and butterfly-shaped leaves (hence its name). Papalo’s flavor is lost in cooking, so it’s only served on the side by request.

Until recently, the herb was scarce. It had to be brought up from Mexico, or it came from a few backyard gardens. But that it’s now grown commercially and is available on a wider scale speaks to the growing popularity of the voluptuous cemita poblana. How lucky are we?