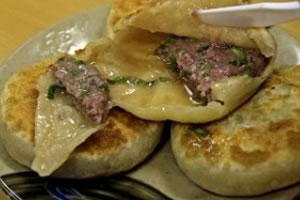 Trying to eat a warm, doughnut-size meat pie from Beijing Pie House with any sort of decorum is a real challenge. They’re probably best consumed leaning over a huge plate or the kitchen sink, because the garlicky juices spurt out in every direction the instant you bite into the crisp, potato-chip-like crust.

These xian bing, a sort of northern dim sum aptly nicknamed Chinese hamburgers, show up occasionally in local northern Chinese restaurants or Taiwanese snack shops. But Beijing native Ming Yang (and many of his friends from Beijing) preferred the xian bing made by his wife, Hong Liu, and about six months ago she agreed to help him open a small cafe.

They squeezed their tiny operation into a defunct Monterey Park bakery, rearranging the display cases to allow more space for tables and chairs. The signage on the front window still reads “Canton Gourmet Bakery,” which can lead to confusion until you pick up the menu.

In what is probably the first xian bing specialty place in the Southland, Beijing Pie House lists an even dozen filling choices in the section labeled “pies.” Their fillings go way beyond the usual beef or lamb to include such combinations as leeks with egg, pork with summer squash or wild vegetables (mostly mushrooms).

But it’s not only about pies at Beijing Pie House. The menu’s pancake section lists a multiplicity of flavorful goodies: flaky flatbreads, crisp sesame paste-filled pancakes, roti-like griddle bread rolled around sauced beef shards and multi-layered buns stacked high with sliced meat. The homeland meat cake, though, is the most splendid of all. The size of a cookie sheet, the cake is cut into 4-by-5-inch pieces that are stacked on a platter. Its thin dough layers alternate with spice-suffused minced meat. Baked to a shimmery burnished gold, every bite — crispy surface, moist meat, pliable juice-soaked inner dough layers — yields a mouthful of kaleidoscopic textural contrasts.

Owner Yang explains through two able translators — young waiters Wilson Wong and Steven Sum — that making this six-layer version is a dying art. But Liu’s family has handed down techniques that originated with chefs descended from the royal kitchens of a long-forgotten ancient fiefdom. It does make for a good story and there’s no denying the cake is a glittering gem in China’s repertoire of savory pastries.

Another galvanizing gastronomic experience (considering the hole-in-the-wall nature of the place) is the beef cake. It’s actually a sandwich, based on a roll that looks like a soft whole wheat sesame-seed-topped burger bun. Split in two, it reveals as many strata as French mille–feuille, with roasted sesame paste layered into the dough. Inside the bun, piled as high as the cold cuts in a deli special, sits a mound of thinly sliced long-braised beef.

Wanting to take their restaurant beyond a mere snack emporium, Yang and Liu have wisely added a focused selection of comforting noodle soups, dumplings and a northern-style lamb hot pot.

Firm shreds of grated pumpkin and small shrimp create a sophisticated filling in a steamed dumpling that’s so lightly cooked each element within the skin retains a distinct shape. The long-simmered broths plumb the flavor depths of beef or lamb and make outstanding soups for hefty noodles. Thick, slightly springy hand-pulled noodles served at room temperature and tossed with bean sauce and fresh vegetables lack the same finesse, but they make for a pleasant salad-like contrast to the oilier pastries. So too do the palate-cleansing (sometimes sinus-clearing-spicy) appetizers that include lightly pickled cabbage and slippery-tart seaweed.

Back on the Chinese mainland, xian bing may be regarded as a snack by those buzzing around Beijing on a bicycle or the metro. But in L.A., a $5 to $7 Beijing Pie House order of four well-stuffed pies served with complimentary bowls of crushed corn congee makes for a copious northern Chinese dim sum spread.