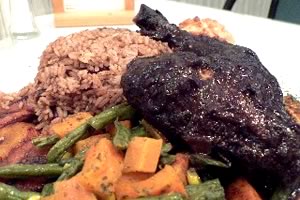 A drive down Western or Vermont avenues around Jefferson Boulevard will put you in the right neighborhood to discover Belizean food and the open warmth of the Creole people who cook and serve it. Still, it’s easy to miss the best items the menus offer, and a full sampling requires several visits to various restaurants. Certain specialties are available only on prescribed days.On weekdays, most places serve a limited menu that revolves around rice and beans cooked together, or “stew beans” poured over rice. With this, there is usually a choice of braised chicken, braised beef or oxtail–or occasionally a whole pan-fried fish.

But on weekends, Belizean restaurants cook up a Creole storm. The owners’ aunts and grandmothers come in to bake Creole breads and enough freshly made sweets, puddings, cakes and tarts to deck out a British colonial tea table. The dining rooms may be a bit stark, but nobody pays any mind; most of this food is sold to go–and the adventure is all in the eating.

Jamie’s, just up the street from the Coliseum, is a good place to get acquainted with Belizean food; they offer the most diverse menu. If you try nothing else, the relleno , served only on Sundays, is a dish to make you glad you’ve sought out this little-known cuisine. A baked chicken is stuffed with ground pork and served in a sinister-looking black broth flavored withrecado , made of roasted Colorado chilies, corn-flour vinegar and condiments ground to a spicy paste. It is served with enough rice to soak up every bit of the celestial sauce; this feast costs $4.50.

Sunday is also the day for Escabeche , sauteed chicken afloat in a sinus-clearing onion and vinegar pickling sauce. The sweet, fried plantain slices that come with this are the perfect counterpoint. If you’re partial to conch soup, come Monday or Tuesday. Cowfoot soup, a rich beefy broth overflowing with gelatinous marrow-like meat, is available every day but Sunday.

Don’t miss the section of the menu labeled Special Delicacies and Dessert. A dollar will buy chewy cassava pudding, dense and saturated with nutmeg. The cakes–substantial milk cake or dark weighty fruit cake rich with candied cherries and pineapple–are also a dollar.

Breakfast at Jamie’s can be bacon and eggs or the Belizean-style stewed chicken and beans. In the morning everything comes with fry-jack, a sort of flour griddle bread that may once have been a staple of the colonial logging camps. On the lighter side are the “nutritional eye openers” of milk and eggs whirled in a blender with soursop, banana or other fruits.

Some of the best Creole baking is done at Strips, with its red floor, blue walls and long orange counter. On Saturday afternoons, you’ll find small round loaves of Creole bread ($1.25), dense with coconut milk and almost imperceptibly sweet. The aroma alone is worth the drive. Typical Caribbean-style “bun,” another yeast bread, is heady with ginger, cinnamon and nutmeg. Here too are European style jam roll pastries and coconut tarts side by side with potato pound–a yam pudding. The free-standing meat pies may resemble British meat pies but they are flavored with annatto and the slight glow of chili.

The cook makes up conch fritters while you wait, blending ground conch meat with onion, flour and a little habanero chili. These puff up as they deep fry and must be eaten right away. You top them with a relish of vinegared onions and hot peppers from the jar on the counter.

On weekdays, there’s a limited menu. But among the weekend specials is “fish boil-up” (Belizeans pronounce this “bawlup” and it costs $6), the national Saturday dinner. It’s based on root vegetables like cassava, taro root and sweet potato cooked in a tomato and onion sauce. Strips adds a hunk of lean fish and a hard-cooked egg to each serving and then tops the stew with a chewy dumpling called “boil cake.”

Few urbanites associate good eating with a pool hall, but Belizeans aren’t hindered by such conventions. Anyway, the pool room at Winks Deli and Restaurant is in a separate storefront.

You must be patient to get the best this kitchen has to offer, for Ruth Tillett, the proprietor, waits until fresh corn is in season before adding ducunu , a steamed tamale-like roll made from grated corn, to her menu. On alternating Fridays there is crab soup ($3.95), not unlike seafood gumbo, with half a small crab, okra and potatoes in an intricately seasoned broth. On other Fridays, conch soup is served in its stead.

Winks has the best Belize-style tamales ($2.50) every day. A whole chicken leg, stewed in a Spanish sofrito sauce base, is cloaked in a smooth envelope of hand-patted masa and steamed.Panades ($1), available in most Belizean restaurants, are exquisitely light here. A cross between pastry-covered empanadas and masa-covered Salvadoran pupusas , the light corn dough is filled with annatto-flavored fish and quickly deep fried. A bean-filled version is also available.

Be sure and try the guarnaches ($1), a Belize-style tostada that layers Belizean stew-beans, hot pepper sauce, pickled onion and cheese on a crisp tortilla.
On Fridays, Tillett bakes Creole breads and “bun” and makes tender-crusted, fresh coconuttartelettes, a rich, sweet rice pudding and a substantial “milk cake” with a gleaming glaze of caramelized milk. Ask for cutobrute even if it isn’t on the menu; it’s a candy made from fresh coconut cooked with brown sugar and ginger.

Tracy’s Place is new, and the weekday menu is limited to familiar Belizean braised chicken, braised beef or oxtail with bean and rice dishes. These good hearty dinners cost around $4 and travel well. On the other hand, the dining room is winsome–one of the few having any ambiance at all–with heavy white table cloths and proper high-backed chairs. An old-fashioned glass case at the back of the room is filled with delicious puddings, “pounds” and pastries.

The tamales–with a whole chicken leg–are huge and savory and the cassava cake not too sweet. On weekends there’s “boil-up,” which is likely to run out early. Occasional surprise specials are not always on the blackboard menu, so it’s best to ask what is available. Do be sure to take home some of Tracy’s Creole “bun”; it’s like a yeasted ginger bread and makes exceptional toast.

Thursday is the best day to visit Joan’s Dashiki. That’s when Joan cooks sere ($5.50), a tropical fish stew with coconut milk sauce over “ground vegetables” (root vegetables). This is pretty spicy stuff, but the heat can be turned up by adding one of the little vinegared habanero chilies that are served on the side. Fried plantains balance the hotness, and rice soaks up the luscious sauce. (Warning: If you order the dish to go, transport the chilies separately.)

The restaurant’s diminutive dining room, with its yellow walls and flowered tablecloths, might be someone’s old-fashioned breakfast nook. There is a blackboard at the door announcing the dishes that are ready to eat. There is stewed oxtail and chicken and whole fried red snapper every day, served with the customary rice and beans or black-eyed peas and rice. The Wednesday special is usually a pepper steak ($5) braised in a slightly vinegar-seasoned broth. On Fridays its conch soup; Saturdays, cow foot soup, stewed beef or short ribs.

The beverages are exotic: Carrot juice is blended with condensed milk and nutmeg for a smooth creamy drink and there’s soursop juice and sometimes “seaweed,” a sweet drink made from underwater moss.

John Wells, of Nel and John’s restaurant, is known for his seaweed and soursop drinks, which he packages in plastic pint bottles. He sells scores of gallons every week in the tiny market next door to the restaurant. Here they also sell such Caribbean staples as frozen conch meat and cassava.

The restaurant’s long counter is in the path of people coming in for take-out orders, and if you plan to eat on the premises the modest dining room is more peaceful. Here you can feast on a varied daily menu; dinner will cost less than $5. Most days such side dishes as ducunu, panades and conch fritters are available along with a selection of familiar entrees.

Joan and Sisters, a storefront dining room, is just up the street from Nel and John’s. They offer plenty of variety, even on weekdays. The beef short ribs, oxtail and whole fried-fish dinners are fine and filling. Dishes run between $4 and $6. If you take them home, be sure to take along some of the homemade pickled onions and peppers that are served at the tables. They are what gives the food dash.

The potato “pound,” a rich, buttery, brown sugary dessert, gets its name from the pounding of the yams that go into it. Coincidentally the massive servings look like they easily weigh a pound. The Sisters’ creamy soursop shakes swirled with leaves and spices are the richest concoctions imaginable. Also worth tasting are the thick slabs of bread and the rice pudding.

It’s easy to miss Roselle’s. The sign with its palm tree is rarely on, and I’ve never seen anyone actually eating in the dining room. It is a pleasantly decorated room with lace curtains and Bob Marley photographs, but the wrought iron bars dividing the dining room and kitchen, and the tiny window through which one must order make the place a tad unwelcoming.

Nevertheless, there are some fine daily specials to be had for about $4. My favorite is Wednesday’s Caribbean-style curry chicken with beans and rice perfumed lightly with coconut oil. Fried plantains complement it perfectly. Meatballs are the Thursday special, with the requisite “boil-up” on weekends. Also available daily are braised short ribs or steak, stewed oxtail, panades , ducunu , beef pies and Belizean tamales.