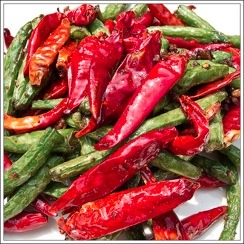 A plate of chicken with chile, Hunan-style, comes to the table with glistening whole garlic cloves and thick ginger slices that dot a sea of deep red whole chiles burying a mound of crisp, fried chicken cubes. Eyes water and noses run, but after the initial burst of spicy heat, a symphony of umami emerges and each bite becomes more intriguing than the last.

Say what you will about the thrill of a capsicum rush, but the earthy, rough-edged cooking from Hunan in south-central China is less about pure heat than about subtle layers of flavor and a harmonious balance of salty, tart, fermented and smoky tastes.
Pickled vegetables add a bright tang to freshwater fish, smoked meats lend richness to fresh and dried vegetables, and fermented black beans provide a mystic depth to dishes that, contrary to popular belief, aren’t all fiendishly hot.

Often equated with the cuisine of neighboring Sichuan, Hunan’s cooking packs its own kind of heat. It isn’t all about mala, the stinging and numbing sensation provided by Sichuan peppercorns. Hunanese cooks rarely use the spice, but when they do, it’s subtly integrated into other seasonings, adding a distinguishing nuance.

When Hunanese-owned restaurants began showing up in Southern California in the 1980s and ’90s they catered to the cosmopolitan sensibilities of immigrants from Taiwan and Hong Kong where elite Hunanese chefs who had cooked to the tastes of Nationalist patrons settled in the late 1940s.

But a few years ago, a different sort of Hunan restaurant began peppering the San Gabriel Valley landscape, and the intensely seasoned rural cooking served here is a revelation.

The food, geared to a more recent wave of immigrants from mainland China, connects to a time when villagers hung pork belly slabs, chickens and even fish and vegetables over wood fires in their kitchens where a long, slow smoking would preserve them. And hot pots, a favored mode of cooking, brought families together after a hard day’s labor.

When you order the smoked bamboo shoots hot pot at Hunan Restaurant in Rowland Heights, the pungent smokehouse aroma from the bubbling mini-caldron transports you back to Hunan’s mist-filled countryside.

In a square, nearly barren storefront that seems transported from a Changsha side street, the Restaurant has been supplying its namesake dishes for more than a dozen years.
Hunan’s famous fermented tofu, cho dofu — the stinky cheese equivalent — seems a little less smelly here than what’s sold on the streets of Chengdu. The golden, lightly fried bean curd squares sport a central dimple to hold a soupçon of the modestly spiced accompanying sauce.

Hunan-style chicken with chile is all that you might expect: Lightly fried cubes of the bird mingle with tons of dried chile and halved garlic cloves and set your palate ablaze. But drinking water to cool down will intensify the sensation. It’s better to fill your mouth with plain rice for a few minutes instead.

The menu at Xiang Wei Lou, a plain but spiffy cafe fitted into the mini-mall next to the Hilton Hotel in San Gabriel, urges: “Please let the server know the spicy level of your taste.” The request isn’t necessarily addressed to non-Chinese. Restaurateurs are aiming to please customers from Hong Kong to Xinjiang.

Still, there’s no shortage of capsicum at this place. Its dishes showcase a typical multiplicity of chile types and styles: dried to an almost black-red or sun-bleached; whole or crushed into flakes; ground to an incendiary powder; fresh and zingy with spurts of chile juice; soft and almost sweet, yet blazing; and, of course, pickled whole or in slices.

There’s considerable talent behind the stoves here. Almost every dish achieves that aforementioned well-calibrated balance: Hot plays against tart with undertones of umami. Boiled sliced fish may sound pedestrian, but the fillets come bobbing in a viscous scarlet broth singing of herbal garlicky-ness.

Like the harmony in a jazz quartet, you get heat in several octaves in a dish of cumin beef laced with dry and fresh red peppers, and fresh jalapeños. Lamb riblets, which the menu describes as chops, are imbued with a musky herbal heat that dares you to stop eating them.

A broth with several varieties of fresh mushrooms bubbles away on a tiny burner, a token of the abundant forest mushrooms for which the region is known. For cooling the palate, there are dishes of cucumber cubes.

Hunan Seafood
Although Hunan province is situated far inland, it doesn’t necessarily follow that the restaurant’s name is an oxymoron. The province surrounds the vast Dong Ting Lake, and Yangtze River tributaries meander the landscape.

These provide ideal habitats for a menagerie of freshwater delicacies: sweet fish, plump shrimp, meaty frogs and turtle, all of which are on the menu here.

But the pièce de résistance at this modern chrome- and glass-decorated spot is the steamed fish head casserole with special hot pepper. Whether or not fish eyeballs and gelatinous tidbits from the skull hold any appeal, there’s a generous amount of delicate meat clinging to the head’s base to enjoy. Dunk it into the accompanying pool of crushed pickled chiles, garlic chunks and savory soy.

Despite the name, Hunan Seafood divides its menu equally between fish, poultry, meat and vegetable dishes.

The menu can be a bit confusing — even for Chinese speakers — or simply incorrect (crab with chopped garlic, ginger and hot pepper turned out to be shrimp).
But fantasize that you’re on vacation in China, where such tiny infractions mean little when the food is this good.

The shrimp (not crab) are plump, succulent and, despite the fiery-sounding seasonings, not incendiary once the easy-to-remove shell comes off.
Fine versions of the familiar fish head, or whole fish paved with tart and hot chiles, sing. And the liu-yan lamb clay pot comes with pungent chunks of meat and slippery clear noodles in a roiling scarlet broth.

Each restaurant has its personal style; here, it involves blanketing many dishes — including fresh frog and sauteed pork kidney with pickled bamboo shoots — with a brilliant layer of fresh, rather mild red chiles interspersed with hot ones.
Request “very spicy” and they toss in more hot ones.

Balance these with chile-less sauteed lamb in brown sauce blanketed with cilantro, or the dish called shredded turnip. This simple julienne of the root in a light, brothy sauce holds a few wispy shreds of fresh red pepper that yield an occasional burst of heat.
The contrast is as unexpected as Hunan’s bold and ancient flavors, which have traveled a circuitous route to brighten L.A.’s Chinese dining scene.