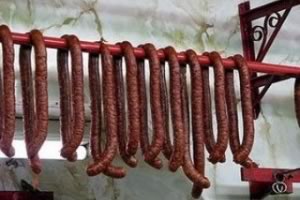 On a Westside street lined with office buildings, banks and voguish-looking stores, you wouldn’t expect to find a couple of old-country Polish butchers tending a brick smoker.Certainly J & T European Gourmet is no funky neighborhood butcher shop–it’s a high-style mirrored store that fits right into this Santa Monica neighborhood– but it does have that smoker, and John Pikula and Ted Maslo have been turning out Southern California’s best Polish-style cured and smoked meats here for almost a decade.From chrome racks dangle a dazzling assortment of sausage ropes, rings and sticks. Pikula and Maslo also make Polish-style hams in a modest kitchen at the back of the store. And there’s more: classic Polish dumplings; portly stuffed cabbage rolls; and bigos , the meat, sausage and sauerkraut stew that Poles have enjoyed for centuries.

Until January of this year, J & T was known as Andrzej, after its original owner, Andrzej Domanski, who opened the shop with his wife Irene in 1981. Pikula and Maslo, both graduates of Technikum Przemyslu Miesne, a college of meat technology and production in Krakow, Poland, were the butchers for the Domanskis from the beginning. They took over ownership of the business in January of this year.

Both men know the ins and outs of meat grading, selection and cutting. They buy high-quality primal cuts and separate them into lean and fat parts (no byproducts enhance their hot dogs).

But small-batch meat curing is as much art as knowledge. Because meat varies from animal to animal in taste and water content, and because spices also vary, no batch is seasoned exactly alike. The meat for sausages must be dry-cured several days to reduce its water content and intensify its flavor; a good sausage maker can judge exactly when the meat is ready for the next step. He must then sample each batch of sausage in the raw state and estimate how it will taste after losing about 20% of its moisture during smoking and curing. The seasonings are adjusted accordingly. J & T makes batches of hams and sausages so frequently that they require little or no nitrate-containing curing salts and the seasonings don’t obliterate the meat’s flavor. 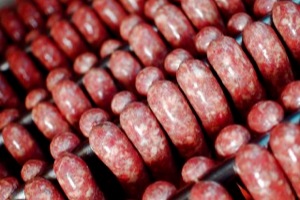 HAMS AND OTHER MEATS

J & T’s hams are treated to a well-balanced cure and smoked over oak wood. Some are cold-smoked at a temperature of 90 to 115 degrees while others are hot-smoked at about 180 degrees; each method produces its own flavor and texture (think of the difference between cold-smoked lox and the drier hot-smoked salmon). Since uncooked meat absorbs flavors more quickly, cold-smoked products have a more intense smoke flavor. A smokier effect can also come from double smoking, which means smoking for a longer time than single smoking.

* GYPSY PORK: A double pork tenderloin shaped into a round and cured as a ham. Its excellent smoky flavor comes from double hot-smoking. Like all the hams at J & T, gypsy pork is sold by the piece or sliced.

* BALERON: Cut from the pork shoulder and known as pork butt, baleron isn’t as lean as true ham or gypsy pork. It is thinly veined with fat and hot-smoked.

* LEAN HAM: The same cut as Black Forest, but single hot-smoked and cooked.

* SMALL HAM: This is lean ham butchered into smaller segments.

* GARLIC HAM: Strips of pork leg are compressed with whole garlic cloves into a long loaf and coated with cracked black pepper. It’s cured and then boiled, rather than smoked.

* SZYNKOWA: Pronounced “shin-KOH-va,” szynkowa is a huge cold cut with a diameter larger than bologna. It’s actually a sausage made from coarsely chopped fresh pork put in a large beef casing and cured like ham. It is single hot-smoked and cooked.

* GOLONKA: This smoked pork shank gives a wonderful smoky flavor to bean and grain dishes, or it can be combined with other meats in stews. It’s pronounced “go-WOHN-ka.”